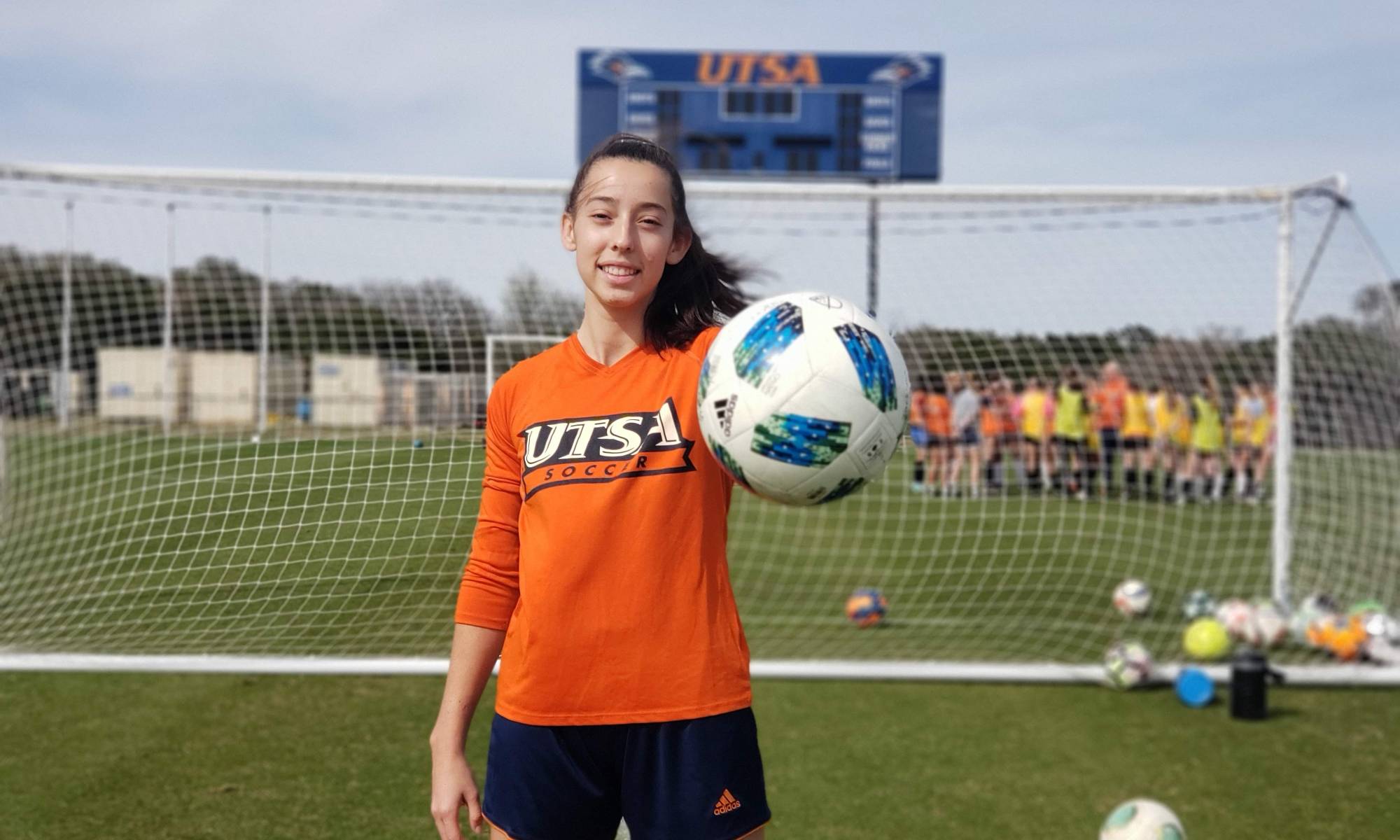 Women’s Soccer/ Futbol is booming in the Alamo City. In 2017 there was only one WPSL team in San Antonio. Fast forward to 2019 and there are now five high-level women’s soccer clubs playing in three semiprofessional soccer leagues. Add onto this one of two Division I women’s NCAA soccer club that has been built for success under the direction of coach Derek Pittman. Lexi Bolton is just one of the many women making a mark on the San Antonio Soccer scene.

Now a sophomore, the 2018 UTSA standout Forward Alexa “Lexi” Bolton recorded 5 goals and 4 assists earning a spot in the Conference USA All Freshman Conference Team. We sat down with Lexi to get to know her and her success as well as her future goals in soccer.

Lexi : I’ve been playing soccer since I was five years old, so about 14 years,and I can’t remember a time where it wasn’t one of the most important parts of my life. My mom played a lot of soccer and she was definitely the one that gave me my athletic ability.

SoySAF: What convinced you to come to the magical city of San Antonio, TX?

Lexi: In the recruiting process, Texas was never a state on radar of places where I thought I would go to school. However, after taking my first visit and seeing all the school, team, and city had to offer it wasn’t a very hard decision from their to realize that this was a good fit for me. People usually ask if it’s hard for me to be so far away from home and my family. Of course I miss my family all the time because who wouldn’t? But being here I developed a new family in my team in a way that isn’t worth trading for anything in the world.

SoySAF: Tell all our readers about your experience with Coach Derek Pittman, now entering his second season and being name All Freshman Conference Team.

Lexi: My experience with Coach Pittman has been everything I could’ve hoped for and more. I was recruited by the old coaching staff and was very confident in what they had planned for me so after hearing we were getting a whole new coaching staff that knew nothing about me it was very nerve wracking. I was already nervous about everything because I was a freshman and that’s what freshman do, we make everything a lot more pressure on ourselves then it’s supposed to be. I knew I had to prove myself a long with everyone else on the team and coach pittman really has given us all the tools to reach our full potential as a team and individuals on and off the field. Personally coach has put a lot of confidence in me and really given me a chance to show him what I can do even though i’m a young inexperienced player at the collegiate level. Coach is willing to give anyone a chance as long as they themselves are willing to put in their maximum effort and because of that it allowed me to become better and better as each day goes by and even get me to the point of being named on to the All Conference Freshman Team.

SoySAF: What’s it like to be coached by Coach Pittman and what’s the number one thing he says you can always do better?

Lexi: Being coached by Coach Pittman is a blessing and a curse depending on the type of player you are. If you are someone that is lazy and isn’t willing to put in maximum effort at every training session then the way he coaches is not for you. He has very high expectations for each and every one of us and pushes us to be better at everything we do. As the season has gone on I’ve seen growth in each one of my teammates physically and mentally like no other. In my opinion Coach Pittman just has something about him and the way he says things that makes me feel like I can achieve so much and it allows me to push myself farther in training and conditioning than I thought was even possible. If there’s anything that he says that I can always do better at it would be to trust in myself on the offensive side of things to  attack and score goals because even as attack oriented as I already am he knows there is still more potential for me to do even more

SoySAF: How would you describe yourself as a player?

Lexi : As a player I would describe myself as someone that is always looking for the back of the net and the opportunity to create chances that eventually get the ball in the back of the net. I know i’m not the biggest player in the world so where I may lack in size and strength I feel as though I make up for it in speed and creativity on the ball. Personally I feel like my left foot is my biggest strength because a lot of defenders don’t expect me to cut to my left or favor that side of the field and their split second lapse of focus on me potentially cutting that way is something I can exploit and use to my advantage in several ways.

SoySAF: What does a typical week of soccer look like for you? How number of practices and games?

LEXI : A typical week of soccer, in season, is very busy. We have usually around 3-4 training sessions in the week along, depending on our travel schedule, along with weight lifting usually about twice a week. Most of our games are on Fridays and Sundays with Thursdays being our travel day.

SoySAF: What some of your best experiences in soccer with UTSA?

Lexi: My best experiences of soccer with UTSA have been traveling with the team and all the craziness and fun of being in the hotel with the team and all our bus rides. We all just get along together so well and no matter what we are doing we always find a way to make it fun. Everywhere you turn someone else is doing or saying something that you just can’t help but laugh at. The coaches look at as funny sometimes because we’re all a bit weird but everyone enjoys being around each other and just having fun.

SoySAF: What are your long term goals in soccer?Any advice for young players wishing to pursue soccer in college?

Lexi : My previous long term goal for soccer was to go and play soccer successfully at the collegiate level and I’m currently reaching that goal each day. Now my goals are to just put in all the work I can to make my team as successful as possible and see where things take us. If I could offer any advice to the younger girls out there trying to pursue a college career in soccer it would be to just find somewhere that makes you fall in love with the sport again. It’s not easy being a college athlete and it’s not for the weak. But finding somewhere that is the right fit for you is so important because the only person overall that’s going to make you successful is you so if you don’t like what you’re doing or where you are then it’s going to very hard to be successful.

SoySAF: What are your goals this upcoming season?

Lexi: My goals for this upcoming season are to make a bigger impact on the conference as a team and prove to them that UTSA isn’t a team that can be walked all over. A personal goal of mine is to try and make all conference team and do everything in my power to get our team to the conference tournament and have more success each year.

SoySAF: How important is it for you and the team for fans from San Antonio to come out and support your Local Division 1 Soccer Club?


Lexi : It is so important to be able to keep growing our local fan base and support for UTSA women’s soccer. Having a big crowd cheering at the home games really helps us get pumped up. As our support grows it gives us another reason to want to be the best team we can be and really show up for the fans.

Lexi: Publix will always have a special place in my heart but H-E-B is pretty amazing

SoySAF: Tacos or Cuban Sandwiches… See what I did there Lex?

Lexi (chuckles) : Tacos for sure !

SoySAF: But the most important question….. Have you had Big Red and Barbacoa?

Lexi: I have had Big Red and I don’t really like it and I have not had barbacoa

Catch player profiles like Alexa ” Lexi” Bolton on SoySAF and get to know the local players impacting the game in San Antonio.

Follow all the action in UTSA women’s soccer at https://goutsa.com/index.aspx?path=wsoc and https://soysaf.com/

There was an error retrieving images from Instagram. An attempt will be remade in a few minutes.